VBASE with support for the BACnet protocol. 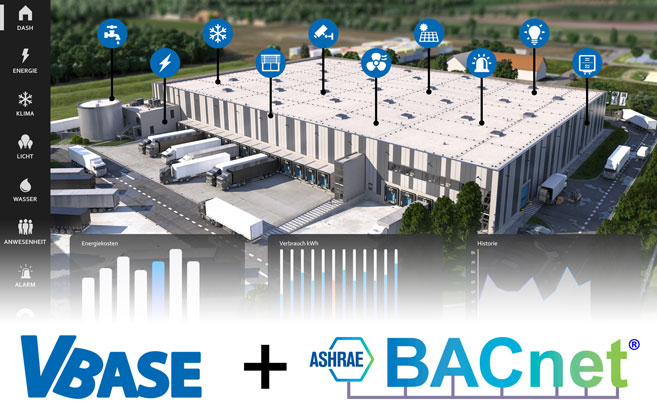 Our VBASE automation platform has always been characterised by a high degree of flexibility in the choice of interfaces. From now on, users in the field of building automation have another option, as VBASE integrates support for the BACnet protocol for the upcoming Light + Building.

In professional BMS and building management systems, different automation systems can thus be integrated in one interface. In addition to BACnet, VBASE already supports other building automation systems, including KNX, digitalstrom, M-Bus, Modbus and 200 other bus and remote systems. Due to the broad system support, data of different systems and manufacturers can be exchanged among each other. Vertical use, across all trades, is also possible. VBASE supports all trades such as lighting, electricity, shading, heating, ventilation, air conditioning or burglar and fire alarm systems for the construction of building management systems.

The VBASE development environment is used to create functional and optical freely configurable visualization and automation projects. The software works with prefabricated function blocks, which allow an easy integration of different functions, such as time switches or meter statistics for energy monitoring. VBASE works both on servers in the background and on compact on-site operating devices for wall mounting. Access to the control data via tablet or smartphone is also possible.

VISAM GmbH will present the VBASE-BACnet integration and other new functions at the upcoming Light + Building in Hall 11.0 - D71.
All further information: www.vbase.net

Corona-crisis: We are still there for you!

VBASE with support for the BACnet protocol.

Missed the SPS? No problem, in our review we summarize the most important things for you.

Here is VBASE in action